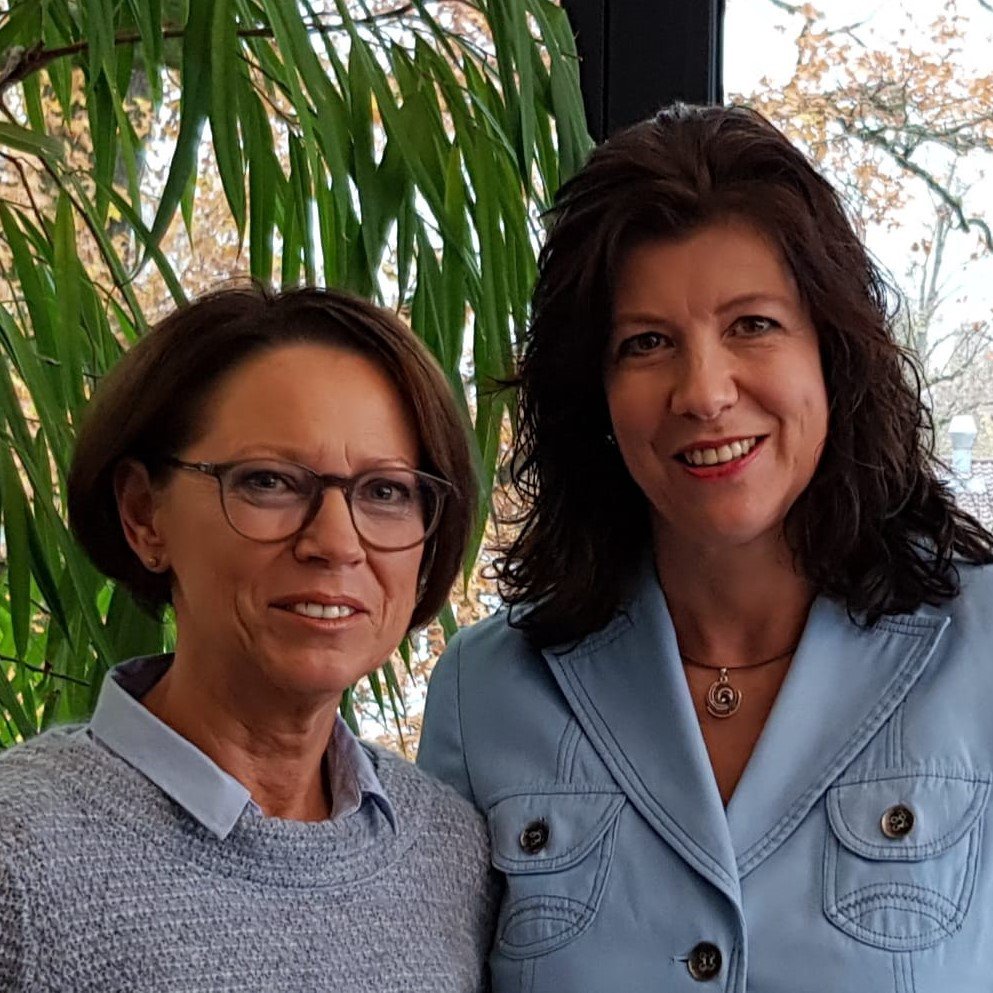 About Sabine and Silke

Sabine and Silke form a PAIRfect team and share how they found each other and talk about the advantages of job sharing at Evonik.

Hello you two! The platform PAIRfect was first launched in November 2018, but you've been travelling in tandem for 7 years now. How did you "find" each other back then?

Silke (right in the photo): It all started with a smart HR colleague who told me that a manager (Corporate Innovation) was looking for a new assistant and that I should contact him. So I did. As my daughter was still very young, a full-time job was out of the question for me. The colleague from Corporate Innovation said: "Then we'll just take someone else." No sooner said than done. The second part-time position was advertised internally.

Sabine (left in the photo): This came at exactly the right time for me, as my part-time job at CA had just been terminated.

Silke: When my supervisor told me the name, I was immediately hooked, because we both knew each other from Degussa's time in Frankfurt and we both liked each other. So, my tandem partner was fixed. :-)

What was the trigger for you to share a job? Silke has just mentioned her daughter...

Silke: After the birth of my daughter, I first took parental leave for two years and then returned to Evonik on a part-time basis. At first, I had a 50 % part-time job with another colleague. When the opportunity arose at Corporate Innovation, I then increased my working hours by 10 %.

Sabine: In essence, family planning was also the main reason for me. After the birth of my first daughter, I was on parental leave for 3 years. When I came back to Evonik, I had a very exciting kind of part-time work: seasonal part-time work. In other words, I was only hired to replace the assistant to the divisional director on vacation. So I had an annual working time of 60 days (about 5 days per month) to cover for vacation and illness. If I had to work for 3 weeks at a stretch, my grandparents would step in. This became difficult when my second daughter was born, and my older daughter went to school. In the course of time, however, it has also become apparent that part-time work is not only a blessing for childcare. Without the reduced working hours, I would not have been able to take enough care of my sick father. And now there is also time for a dog and hobbies ...

How do you organize your daily work as a tandem (coordination, holiday planning, distribution of tasks, etc.)?

Silke: Meanwhile we do a lot of things "digitally", i.e. we write information into the existing e-mails, we have a common to-do list in OneNote and of course we call each other 1-2 times a week.

Sabine: Besides, we also have access to the mailbox of the other, but both the boss and most colleagues send requests immediately to us both. As far as the distribution of tasks is concerned, the first rule is: Whoever is there takes care. We don't separate the tasks, everyone does everything.

Silke: Whereby you can also use your preferences :)

Holiday planning only works with a 3rd colleague (full-time), who helps out when one of us is on holiday or sick.

What experiences have you had with colleagues on the subject of job sharing?

Silke: So far, we have only received positive feedback. The colleagues recognize the advantage that we both know everything and are always able to provide information.

Sabine: What probably speaks best for itself and the success of our tandem is the fact that we have successfully stayed together as a tandem. When our original manager retired, it was only uncertain what would become of our tandem. But the already known smart HR colleague had another super good idea and warmly recommended another colleague, who was just looking for a new assistant, as a tandem that had been working together for 4 years. As he is always open to new things and we immediately liked each other when we had a personal interview together, we were taken on immediately and have been working together successfully for 3 years since April 1, 2016.

What are your tips to make job sharing successful?

Silke: The chemistry must be right. You should be a team player and always pass on all information to the other person. Everyone tries to complete the tasks that arise on their working days as quickly as possible, not leave them for the other person. One must be able to rely on the job-sharing partner and have complete trust in each other.

Sabine: We have also noticed that the similarities are an advantage: similar working methods, same age, friendly relationship. At least for us, a distanced behavior and competitive thinking would be unthinkable for a successful cooperation.

See what other team members say about Evonik.