My first Encounter with UNITECH International and Evonik

Cléa decided to join the UNITECH International network during her master studies. In our networks@Evonik blog, Cléa not only introduces you to UNITECH but also tells you about her application experiences and how she got to know Evonik.

Since high school, I was very interested in the Biology field: I wanted to understand the living system, to know how our body works and interacts with other living beings. Yet, after studying Biosciences (Biochemistry and Biotechnologies) for a few years in Lyon, France, I realized that I would prefer to have a job focusing more on communication than lab experiments. The interaction with people and team work got more and more importance in the development of my future career and spending five days a week working on a lab bench was unimaginable for me. Thus, I looked for possibilities of getting familiar with business and marketing while doing my master’s degree in Biosciences.

A friend of mine introduced me to UNITECH International, a network consisting of nine top-class European universities and around twenty industrial partners including Evonik. At that time, participants presented the program at my home university, called INSA Lyon. The international aspect and fostering of professional skills development convinced me to apply. The fact that the program included an academic exchange and an internship abroad was another good reason to become part of the network.

A few weeks after sending the application form, I was invited to an Assessment Center to introduce myself personally. The day was divided into three parts to get to know the potential members better. The first part consisted of a group work where corporate partners (CPs) like Evonik representatives could see how you interact in a team. It already came out that I am more of a mediator in a group i.e. someone who mediates between members of the team, has an overview of tasks, listens to everyone’s ideas and summarises them to discuss them with the team etc. Being observed while you solve a group case doesn’t happen so often, thus it was interesting to have a feedback and understand what role fits better to me in a team. The second task was an individual case study we had to solve and present afterwards. The subject was not really the point as it was completely hypothetical - it was more about assessing our way of thinking and ability to adapt to unexpected situations. The last item on the agenda was a personal interview with two CPs and eventually I was accepted to the UNITECH program.

So, my UNITECH year began in August 2017 with the first workshop week in Lyon and my journey with Evonik started soon after. In the very beginning, I have to admit that I didn't put much effort into networking with CPs coming from the partner companies. During the first module, I only talked to a few employees from various companies to have an overview of the different industries represented in the network. However, the longer I was part of the program, the more important networking seemed to be. There were a few companies linked to Biochemistry or Biotechnologies and as I knew I wanted to focus on Food and Nutrition and less on the medical or pharmaceutical industry, Evonik appeared to be the most attractive company for me. Along the year, I had several occasions to meet some Evonik employees and get to know the company better and better. I could have an insight into its product world and get an idea of possible internship opportunities.

In the second part of my blog, I will tell you more about the program itself and all the benefits it brought me.

In the networks@Evonik blog, members from networks with which Evonik cooperates report on their experiences with the network and their work with Evonik.

Sept. 3, 2021, 10:15 a.m.
On September 1st, I started my 6 months internship in the Employer Branding department of Evonik Industries in Essen. On September 2nd, I already felt integrated in a young, creative team that welcomed me very warmly. I started working on my own tasks as a part of the team and I am very excited about the upcoming months at Evonik Industries. #HumanChemistry #Evonik #EmployerBranding #Internship
...more

Sept. 8, 2021, 8:18 a.m.
I am happy to share my Quick Fire Interview with you. Shooting this video was a really great experience and it was a lot of fun working with the other interns, Kai from Onboarding, Rebecca from Talent acquisition and Nils from Employer branding It was a pleasure being able to work with them to create these video series. Stay tuned for the upcoming Quick Fire Interviews! #HumanChemistry #Interview #Onboarding #Quick Fire Interview #A&R Backstage #InternshipatEvonik
...more 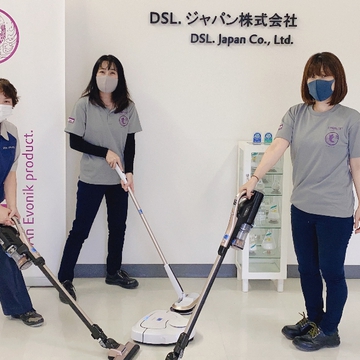 Sept. 15, 2021, 2:05 a.m.
Our company has TPM activities. One of the themes of our Admi & SCM team is the establishment of office cleaning. And today we're introducing new cleaning tools and robot vacuums. Clean the area of ​​100 tatami mats. It ’s amazing, isn’t it? #Japan #TPM #DSL. Japan
...more